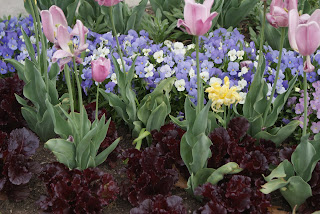 The Kauffman Garden at 4800 Rockhill in Kansas City, Missouri is already in full beautiful spring bloom. Last week I met a friend there for a brown bag lunch. I arrived early and took some pictures.
Can you see the dark plants at the bottom of the photo? Ornamental cabbages. They lead our eye from the adjoining bed to this one and up to that one spot of yellow accent. It makes for a pleasing bed doesn't it?
Our writing is like this. We need something almost invisible to move us from one place to the next in the story. Transitions do the job. When they are doing their job, the reader doesn't even notice she is being moved from one time or place or character to another. A transition can be a word, phrase, paragraph or even pages. It can be as simple as the words now, later, after a while, or before they were married. Think of it as a sort of ornamental cabbage of writing.
Now, what about that one yellow tulip? Pretty, isn't it? In the entire two acres of the Kauffman Garden, this was the only spot where there was one lone yellow tulip among a group of other flowers. It really grabs attention doesn't it?
In our writing we want a few yellow tulips, but just as it is in this garden, we don't want to overdo them. Too many precious phrases, too many lovely metaphors, too many exclamation points, too much dialect, and the writing loses impact. Use them sparingly.

CHOCOLATE INKWELL
This recipe appears to have been cut from the side of a cake mix box. I have no idea how a boxed mix would get into my house.
Hidden Treasure Cupcakes
Prepare cupcakes as directed (on the cake mix box that mysteriously appeared in your pantry)
Before baking, top each cupcake with any flavor miniature sized candy bar.
Bake as directed and cool completely.
Frost cupcakes with Fluffy Fudge Frosting (frosting in a can -- horrors! -- mixed with whipped topping).
Top cupcakes with chopped candy bars.
Store loosely covered in refrigerator (or on your hips).

Find more writing ideas and resources at http://www.angelinyourinkwell.com/
Follow me on Facebook.
©2010 There's An Angel In Your Inkwell®
Posted by Carol at 5:30 PM No comments:

Email ThisBlogThis!Share to TwitterShare to FacebookShare to Pinterest
Labels: How to direct the reader and not go too far plus chocolate treasure cupcakes
Newer Posts Older Posts Home
Subscribe to: Posts (Atom)