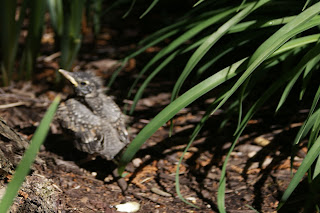 I came across this poem by Ted Kooser, the Nebraska poet who became Poet Laureate of the United States, in a paperback copy of his book, Delights & Shadows

. The title of the poem is "The Necktie."
His hands fluttered like birds,
each with a fancy silk ribbon
to weave into their nest,
as he stood at the mirror
dressing for work, waving hello
to himself with both hands.

Like the hands in Kooser's poem, the little bird in the photograph above was fluttering around under the lily leaves when I spotted him. Later he managed to get some elevation with his wings, but his flight was straight up, then down. Again he tried. Up, then down. Then he managed a few inches of forward momentum before it was down again. Finally, off he went. Across our yard and into the pear tree across the street.

I think writing is like that. We try, try again, and finally get something that takes flight. One of the devices that helps our writing take flight is the use of similie and metaphor. When I was a young writer, I thought beautiful images just poured forth from some writers. I knew I was not one of those writers. Then I attended a meeting of writers where Sue Monk Kidd was speaking. She told about being on vacation and sitting at the beach creating lists of metaphors from the things she saw around her.

"You gotta be kidding," I thought. "Consciously draft images? Don't they just flow from gifted writers like milk and honey?" Somehow I had the idea that working at these things was cheating. Well, hey, this ain't no Scrabble game. I learned it is not only fair and acceptable, it is necessary, to use any and all resources of which we can avail ourselves.

In my library copy of her book, Writing Personal Essays: How to Shape Your Life Experiences for the Page

Another exercise for writing good description is to describe one thing as if it were something else usually thought to be unrelated. In bringing the two together, the reader gets an immediate, refreshed experience of your subject. (p. 29)

The operative word here is practice. Like the little bird in the picture, your comparisons will improve. Some day you may soar like Ted Kooser.

(Note: Some of the books mentioned today are out-of-print. Check your library or used book sales for copies. You might find them online at very high prices. Keep looking. You can find cheaper copies. Or just read a library copy.)

Practice similies. Let's start with easy ones.
Chocolate is like . . .
Exercising is like . . .
Getting a teenager to clean under her bed is like . . .
Think of it as Brain Training. Keep adding to your list.

by Stephanie Ashcraft and Donna Kelly. I purchased this little spiral bound book at the gourmet housewares store on Pearl Street in Boulder, Colorado. An abridged version of this cookbook would say, "Open your fridge or pantry. Take out anything or everything. Roll in a tortilla." That's how I cook so I love the book. (Does that qualify as cooking?)
Chocolate Raspberry Burritos (Three of the most beautiful words in the English language.)
2 cups semi-sweet chocolate chips
2 cups fresh or frozen raspberries
8 medium flour tortillas
4 tablespoons butter, melted
4 tablespoons sugar
2 teaspoons cinnamon
Place 1/4 cup chocolate chips and 1/4 cup raspberries in the center of a tortilla. Fold edges in and roll up to form a burrito. Bake seam-side down on a baking sheet 20 minutes at 425 degrees, or until light golden brown. Remove from heat and brush with melted butter, then sprinkle with sugar and cinnamon. Makes 8 servings.
For more writing tips, writing prompts, resources, fun stuff for writers, and life story writing how-to visit www.angelinyourinkwell.com
All Rights Reserved ©2010 There’s An Angel In Your Inkwell®
Posted by Carol at 5:00 PM No comments: Links to this post