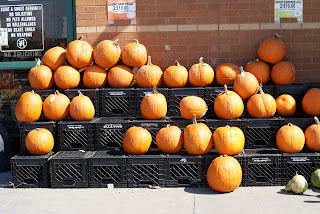 WRITING TIP
At a recent meeting of the life story writing group, Sue read something she had written about her father's duty in the Civil Air Patrol just before and during World War II. She had her father's pilot log book and she had researched the history of and requirements for membership. Lots of good material.

However, Sue felt that the story read like an encyclopedia entry. She asked the group for opinions and suggestions.
We all agreed that the story was fine as it was, but the only problem with the story is the same problem with the photo above. We don't know where to give our attention. There are too many pumpkins, too many shelves, one sign that has absolutely nothing to do with pumpkins, and other signs that, while they give information, aren't especially interesting. 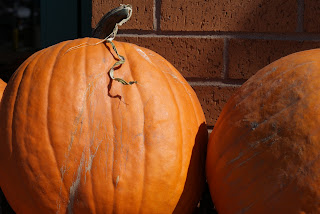 Both the story and the photo can be improved very simply. Get closer. Focus on one pumpkin. Or, in the case of Sue's story, focus on her father in particular instead of all the men of the Civil Air Patrol in general.
For example, instead of writing, "They had to provide their own planes," she could write, "Daddy had to provide his own plane." Instead of writing, "They received a small daily allowance," she could write, "Dad's allowance barely covered daily meals." (Sue had specific details such as the amount of the allowance. I just don't remember them right now, but you get the idea.)
Get close so we really get to know the person. And then we care. And then we want to read more.
WRITING PROMPT LAUNCHING PAD
Out of my gourd. Remember that old saying? I've always liked it. Maybe gourd is just a funny word. And gourds are just kind of funny themselves. Lumpy and bumpy and twisted. Colorful. Useful. So what does it mean to be out of my gourd? You don't need to use that actual phrase. Just think of a time you felt crazed or wacky or lumpy and bumpy.
CHOCOLATE INKWELL Today's recipe is from Tamara Hall's contribution at http://www.thecookbookproject.com/. It's an interesting combination of pumpkin and chocolate chip -- perfect for this time of year -- Halloween or Thanksgiving.
Pumpkin Chocolate Chip Cookies
Ingredients:

Get closer to your writing life with the Write Your Life Story in Eight Weeks Workbook, Second Edition, available at www.angelinyourinkwell.com/buy.html