Stir It Up Today

"Today's recipe cookies? How did you do that so fast?"

She said she had all the ingredients on hand so she made them. A double batch, in fact. Thank goodness she lives nearby. I was there in a flash.

I was so impressed with Justine's ability to stir up a batch of cookies without all the "someday-ing" I indulge in, I thought it would be a great blog post. I would take a picture of a plate of the cookies she sent home with me and write about how important it is to avoid procrastination I would say, When you have a good idea, write it down. When you see a good market for your writing, send your writing out. When you remember something from your life, write about it immediately.

That was what I was going to do -- someday -- when I got around to another blog post. 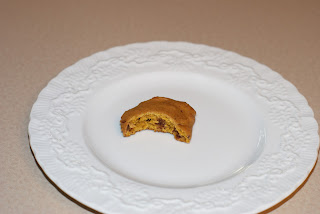 And then one day, I entered the kitchen and there was Gentleman Friend with the last portion of the last cookie raised to his mouth.

"Waaaiiiit!" I wailed. "I wanted to take a picture of the cookies."
The poor guy looked downright guilty as he gently laid the cookie remains back on the plate. I snapped one quick picture and returned the morsel to him. I might mention he was not so guilt-ridden he was unable to gobble down the last bit.

That's what happens. Fail to write down an idea, a story, send a submission, and it disappears before you know it. I'm going to try to follow Justine's good example and stir up my ideas today and not dream about doing it "someday."

PS - I heard from Ronnie that she, too, made the cookies that day.

Red-handed. Have you ever been like Gentleman Friend? Caught red-handed? Actually, he was doing nothing wrong, but sometimes we all do. Maybe you were red-faced instead of red-handed. Maybe you saw a cardinal one day -- they're red. Maybe you were sunburned. It's okay to go far afield with the Launching Pad. Write whatever comes to mind. Later, shape and polish it into a story or essay.

CHOCOLATE INKWELL The inspiration for today's recipe came from Allrecipes.com; however, I didn't follow the recipe exactly. If you look on Allrecipes.com, the original recipe is called Israeli Stuffed Dates. It calls for Medjool dates, bittersweet chocolate, pecans, and sweetened, shredded coconut. My version is below.

Dark chocolate chips - because I like dark chocolate. You could use milk chocolate or whatever.
A package of whatever kind of dates the grocery store has
Walnuts - because that's what I had on hand
Sweetened, shredded coconut. Optional

Melt small batches of the chocolate chips. While it melts, keep one eye on it and one eye on the dates as you stuff them with nuts. You can sort of shape and form the dates around the nuts. Dip one end of the stuffed date in the melted chocolate. Place on wax paper. Sprinkle with coconut. I served these in little candy cups to help them stay upright. Dates and dark chocolate are a good source of all sorts of healthful stuff.

Writing your life story is good for your health, too. Get started with Write Your Life Story in Eight Weeks Workbook, Second Edition, available at www.angelinyourinkwell.com/buy.html.

All rights reserved 2011 There's An Angel In Your Inkwell®
Posted by Carol at 9:54 AM No comments: Links to this post